Many users report feeling much more energetic and having better mental focus after using Regulat®. They often feel invigorated, have perceptibly more physical energy, perform better, and are physically fitter but at the same time feel more relaxed with an inner calm. 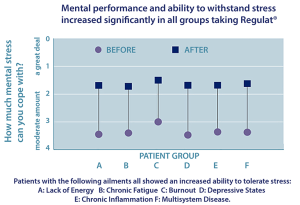 So although we usually talk about Regulat in terms of health improvements, there also seem to be mental improvements as well.  One study showed that the ability to manage mental stress increased significantly.

A management trainer who works with management leaders, has found impressive results. When participants take Regulat, seminars are more intensive, and participants have more stamina and greater powers of concentration.

A research study actually showed showed that powers of concentration increased by 59%, and the ability to cope with mental stress by 52%. Sleep disorders were reduced by 56%. Most participants felt more relaxed, calmer and more composed, but at the same time better able to do things.  Daytime lows and fatigue lessened. In general, people often seem to sleep deeper and longer and wake more refreshed.  Your family will appreciate this!

The results are likely related to an increase in intracellular ATP, the mean “energy currency” of the cells. One study showed that when taking Regulat, ATP increased by up to 187%.