For thousands of years people around the world have found that fermenting certain foods in a controlled way increases digestibility of the raw food and adds health-giving effects.

Evidence of the use of controlled fermentation dates back to ancient China, South America, and ancient Egypt, and includes leavened breads, milk products and pickles.  “One of the earliest functional attributes of fermented foods was their ability to introduce a change in the microflora of the human digestive tract”, says Mark J Tallon, PhD, Founder of NutriSciences Ltd. “Because many fermented micro-organisms, such as probiotics, survive digestion, they can reach specific sites of benefit within the intestinal tract where they perform functions that may aid in host health,” adds Tallon.

Tallon recognizes the history of fermentation and that it has evolved into a natural, yet state-of the-art science that is an invaluable component of the human diet. Since the time Louis Pasteur proposed using microbial metabolism to produce fermented foods, “microbiologists have uncovered the interactions of bacteria and yeast as a means of producing many natural products,” says Tallon.

As important benefit of fermentation is that of increasing the effective nutritive value of foods by increasing the ability of the body to absorb vitamins and nutrients presented during digestion. Fermentation methods have evolved from traditional to modern techniques that allow for greater production of fermented products in a clean, controlled environment.

A modern contribution to the fermentation tradition is cascade fermentation, a methodology modeled on the human body’s natural digestion process. The cascade ensures that enzymes, as well as all other micronutrients with a large molecular weight, are broken down into smaller units. It is well known that only small molecules can be absorbed through the intestinal villi. A cascade-fermented supplement such as Regulat® – whose starting ingredients are whole foods (fruits, nuts and vegetables ) – holds a diversity of enzymes, di- and tri-pepides, etc. that are smaller and highly bio-available, even being able to be absorbed directly into the blood stream.

Supplements are used extensively by people aiming to get more balanced nutrients. As we know, there are many options on the market – vitamins, minerals or herbal products. As their name implies, these are to ‘supplement’ our daily food intake. 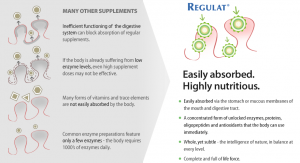 Furthermore, if the body is already suffering from low enzyme levels – which is very common today – then even high supplement doses may not be effective as the body doesn’t have the enzymes to metabolize the supplements. Plus, vitamins and trace elements may be sold in a form that is not easily absorbed by the body.

According to the book  ‘The Health Benefits of Cascade Fermented Food’, our food is losing its nutritional value. “Early harvests, long storage periods and additional processing through radiation, heating, sterilization and conservation in today’s food factories cause a huge loss of essential enzymes and other bio-active substances.”

Enter Regulat – a concentrated, bioavailable form of unlocked enzymes, proteins, oligopeptides, and antioxidants that the body can use immediately. Regulat’s live cascade fermentation process is similar to the body’s own enzyme cascade process. 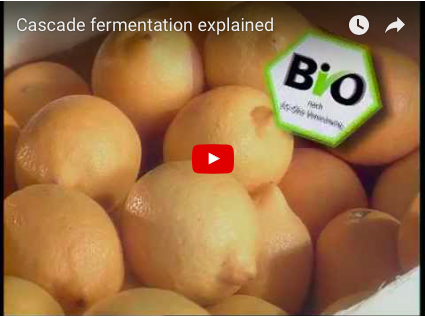 YOU ARE WHAT YOU ABSORB

Regulat is a supplement that is a balanced, complete, liquid concentrate of valuable nutrients and ingredients, a concentrate full of ‘life force’. Most importantly, it is easily assimilated, and the body can begin using it immediately.

Choosing to incorporate Regulat into your daily regimen thus helps create a balanced internal environment, allowing the body to perform its functions more efficiently and better absorb all that you consume. Many recognize the connection between supplements and health benefits; the key is to set up your body for success and help it to absorb those supplements!